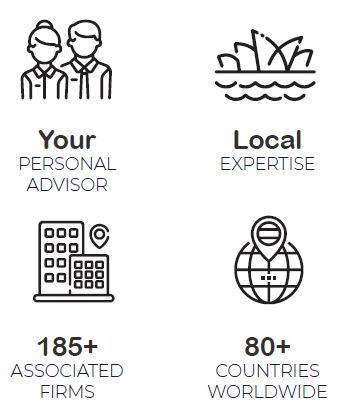 Walker Wayland NSW was formed in Sydney on 1 February 1985 following the merger of Walker Meares & Co and Wayland & Wayland.  Both firms had a strong presence in the Sydney business community for more than 50 years.

The firm is a leading and independent member of Walker Wayland Australasia Limited with over 20 member firms across Australia and New Zealand. The firm is also an independent member of BKR International, an international
association of like-minded accounting firms.  BKR International has more than 160 member firms with over 500 offices, in 80 countries throughout the world. Our clients can rely on us for local knowledge, backed by national and international associations.

Walker Wayland’s culture can be defined in terms of 6 core values:
1. Be passionate and determined
2. Build open, friendly, and honest relationships with straightforward communication.
3. Build a positive team and loyal clients
4. Embrace and welcome new ideas for improvement
5. Pursue flexible working routines and encourage work-life balance
6. Get it right from every angle – the first time

As a firm with live our motto of being TRUSTED, PERSONAL, and ACCESSIBLE to our team, our clients, our communities, and our networks.

Walker Wayland NSW – In the Community

Walker Wayland NSW have been focused on servicing our clients all while considering our environmental and social footprint. We are a Carbon Neutral Organisation and we offer reporting and assurance services that facilitate becoming Carbon Neutral.  The Walker Wayland NSW Audit and Assurance team led by our Head of Audit and Climate Change – Wali Aziz, who is also a registered Carbon Auditor, can provide Carbon Audit & Advisory Services to organisations to who this initiative may be of interest.

Why Work With Walker Wayland?

We go all-out to be a team where we inspire and empower our people to have a growth mindset while ensuring that we never lose sight of the high expectations from our clients. We breed a culture of ongoing development and delivering value to our clients collaboratively as we strongly believe that “Together We Can”. We nurture diversity to encourage our people to bring their full and genuine selves every day as it enhances creativity, humility and trust. We are Walker Wayland NSW.

The fast pace environment that we operate in means that business owners and Boards need a team who can look after every facet of an organisation. Our clients range from small family-owned businesses and individuals to large companies including listed entities, private and public companies, charities, not-for-profit organisations or multinational groups. Our service is customised to suit each of our clients, taking into consideration their size, culture, capabilities and goals. For our clients, this means they can rely on advice and solutions tailored to their specific requirements.

When Fay started, the office was located in Phillip Street Sydney and then moved to Level 1, 109 Pitt Street. The firm was at Pitt Street for about 20 years until 14 June 1988. On this day the office relocated and Fay decided at the age of 72, it was time to retire.

Fay was always very formal and “in company” referring to John Walker as Mr. Walker however in the office she always referred to him as “the Boss” and the whole office knew who she was talking about. Fay held John in high regard and had a respect for his professionalism and humanity which was reciprocated. He encouraged her to save and provide financially for her future.

Fay enjoyed the work with the firm so much she decided she wanted to be an Accountant and enrolled at the local Technical College to study accountancy. When she had nearly finished the course she was informed that if she wanted to become a Chartered Accountant should would have to do another six years part time at university. Fay considered that was too much at her stage in life and accordingly could not follow this dream.

Fay did not marry nor did she have any relatives but she always considered the Partners of the firm her family, taking great interest in all the children of the Partners and the employees. Even after retirement she attended the Office Christmas party every year until the age of 92. It was something that she always looked forward to.

As a result of not having any family, Fay and John Walker had many discussions as to how she would like her Estate to be dealt with. Fay decided that she would like to endow a scholarship for a girl to study at University and become a Chartered Accountant – her dream that could not be fulfilled but a dream to help a girl to do what she could not do.

We know it’s not all about work!

At Walker Wayland, we make an effort to get to know the people around us and ensure that there are plenty of opportunities for socialising and a bit of fun.